Since launching in 2017, NIH’s Next Generation Researchers Initiative (NGRI) is continuing to address longstanding challenges faced by researchers trying to embark upon and sustain independent research careers as well as to promote the stability and diversity of the biomedical research workforce. We have focused on early-stage investigators (ESIs), a group we recognize as being hard hit by a hypercompetitive funding environment along with pandemic shutdowns. Today, we are sharing data on our progress towards increased support for ESIs and other targeted groups.

We define ESIs as those who are within 10 years of their terminal degree or completion of clinical training and who have not yet been awarded a substantial NIH grant, including R01-equivalent grants or more. Note, there are certain smaller grants that an investigator can receive while still retaining their ESI status. New Investigators Non-ESI are new to the NIH system but more than 10 years beyond their terminal degree or completion of clinical training. Another critical group of interest are “At-Risk” investigators, who are those who have received a prior substantial NIH award but, as best we can tell, will have no funding the following fiscal year if they are not successful in securing a competing award this year. “Established” investigators have received a prior substantial NIH award and will have NIH funding the following fiscal year irrespective of the outcome of this year’s competitions. Please note that throughout this post, the people we refer to are designated by their institutions as Principal Investigators; institutions, not scientists, are the applicants and recipients of awards (see here).

We have seen steady growth in the number of ESIs supported by NIH, increasing from 978 in FY 2016 (before NGRI started) to 1,412 in FY 2020.  As seen in Table 1 below, this positive trend was also observed for at-risk investigators (see this blog for more). 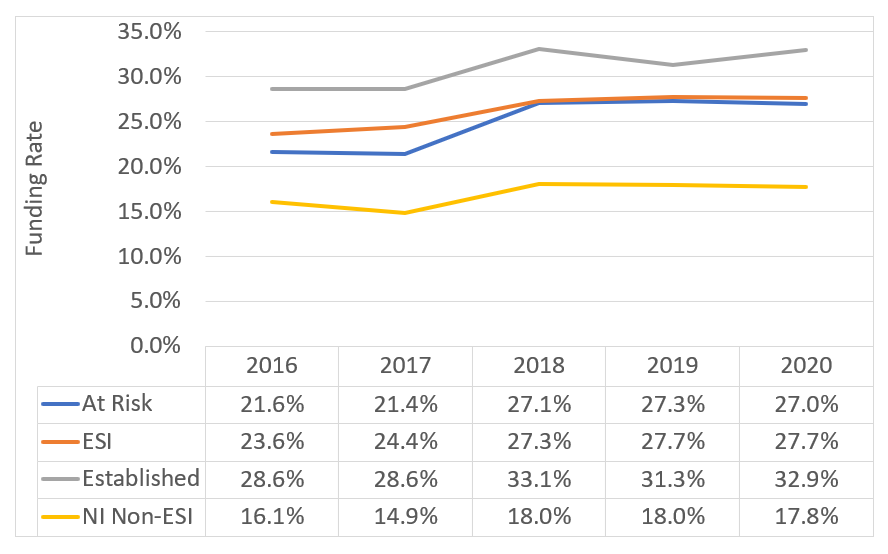 We looked at the outcomes of FY 2020 Type 1 R01-equivalent applicants according to career stage and broken down by voluntarily self-disclosed investigator demographics, including gender (Table 2), race (Table 3), and ethnicity (Table 4). NGRI’s emphasis on diversity is an important component of NIH’s overall interest in enhancing workforce diversity (see also these posts from January 2021 and November 2019). The column “Discussed” refers to the number of applicants who saw at least one application in which they were designated as principal investigator and made it to the discussion stage of peer review. The “Discussion Rate” is, like the Funding Rate a person-based metric, and is calculated as the percent of applicants (actually people designated as PI’s on an application) who had at least one application make it to the discussion stage of peer review.

Table 4 shows that the FY 2020 discussion and funding rates for researchers who are not Hispanic/Latino are better for all career stage groups compared to those in the Hispanic group in FY 2020.

The initial funding and aggregate demographic data presented here are helping us better assess the impact of NGRI efforts on enhancing progress to an independent career and promoting diversity. Moving forward, we remain strongly committed to the goals of NGRI to fund more early-career investigators, retain meritorious at-risk scientists, and enhance the diversity of the biomedical research workforce. We will also continue reviewing recommendations, such as those outlined by the Advisory Committee to the NIH Director and National Academies, when designing, testing, implementing, and evaluating future policies and programs to enhance the success of the next generation of talented biomedical researchers.

I would like to thank my colleagues within the NIH Office of Extramural Research’s Division of Statistical Analysis and Reporting as well as the Division of the Biomedical Research Workforce for their work presented here.