We are most appreciative of the feedback we’ve received, through the blog and elsewhere, on NIH support of model organism research. In part 1 of this series, we mentioned that we asked two separate groups to analyze NIH applications and awards. In parts 1 and 2 we primarily focused on R01-based data that were curated and analyzed by our Office of Portfolio Analysis. In part 3, we show results from a broader range of research project grant (RPG) data that were prepared and analyzed by our Office of Research Information Systems. This group used an automated thesaurus-based text mining system which delves into not only public data such as project titles, abstracts, public health relevance statements, but also the specific aims contained in RPG applications.

This is the same approach we use in our “Research, Condition, and Disease Category” (or RCDC) reports, available on the NIH RePORT website. We begin with an automated text-mining process which scans each project, and matches it against a custom thesaurus that draws upon many sources of scientific and medical concepts. The result is a project index of weighted terms and concepts which can be used in the next step – categorization.

Working in teams, these analysts created, reviewed, validated, and verified the scientific relevance of the resulting category definitions. They weighted and adjusted the scientific concepts and terms that make up each definition to show the relative significance of that concept or term in identifying model organism use. They also calibrated matching thresholds to retain true positive matches while removing as many false positives as best as possible. For example, we explicitly sought to exclude cases in which an applicant might cite research involving model organisms, but not plan to use them in his/her proposed projects. For yeast-related applications, our teams focused on model yeast species, and took special efforts to remove projects related to yeast diseases (mycoses). 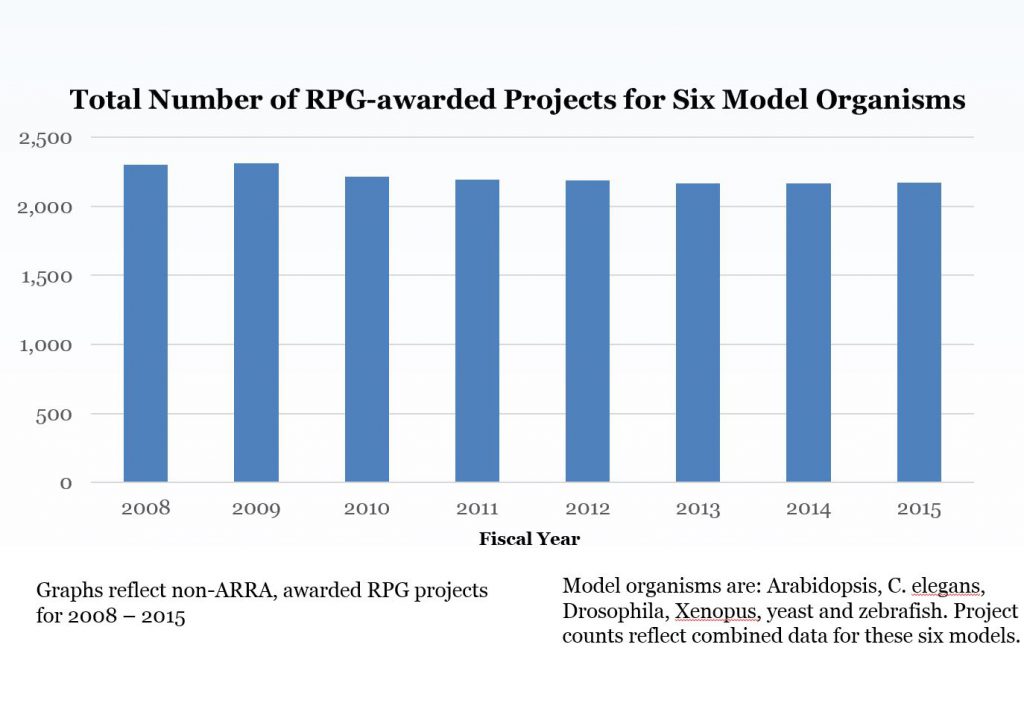 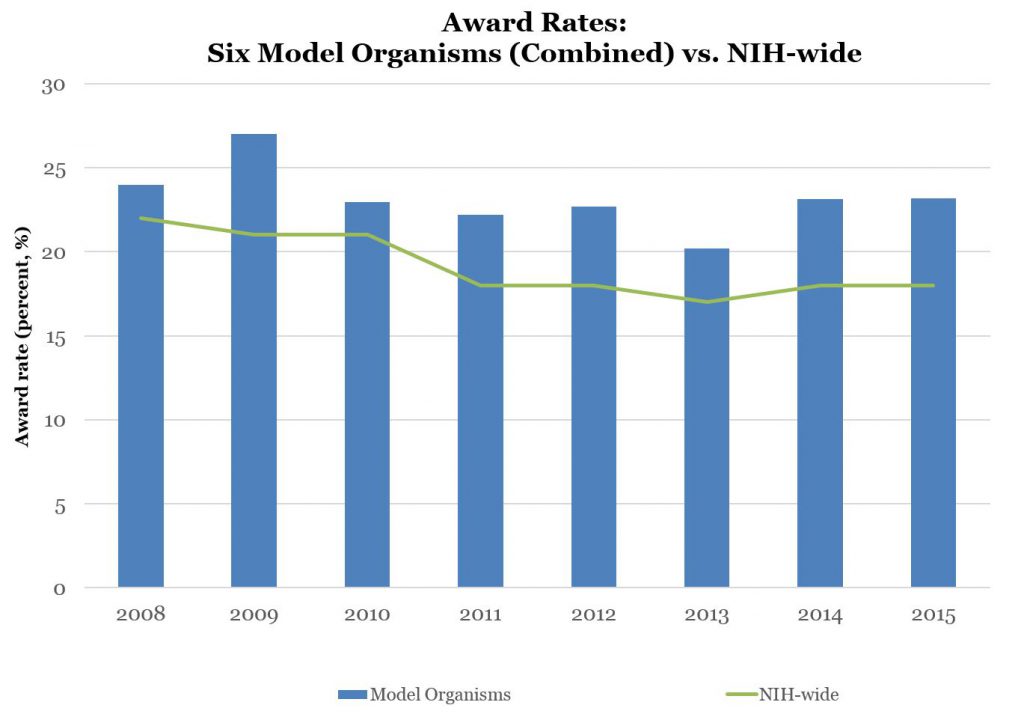 Figure 3 shows funding data for each model organism over time, as well as the comparable NIH-wide funding trend, to put these data into perspective. 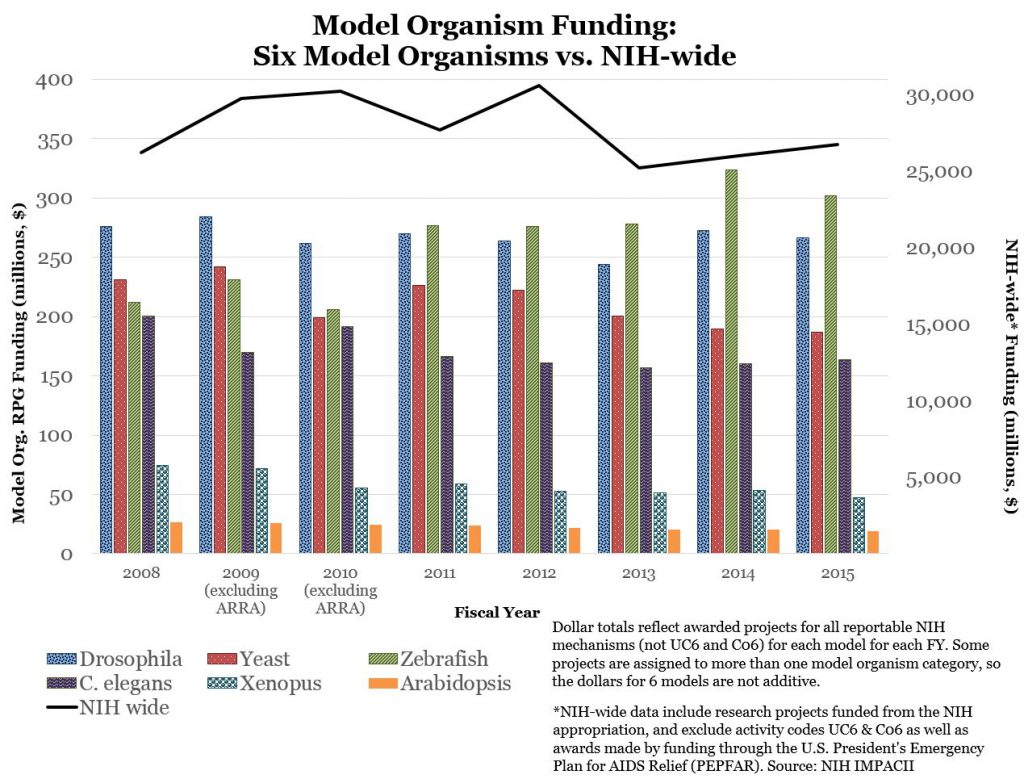 Overall trends are stable – that is reflective of overall NIH RPG funding – though there does appear to be a decline in yeast-model and Xenopus funding, and an increase in zebrafish model funding. However, as shown in Figure 4, over the past few years, award rates for each organism remain at least as high as overall NIH-wide award rates. 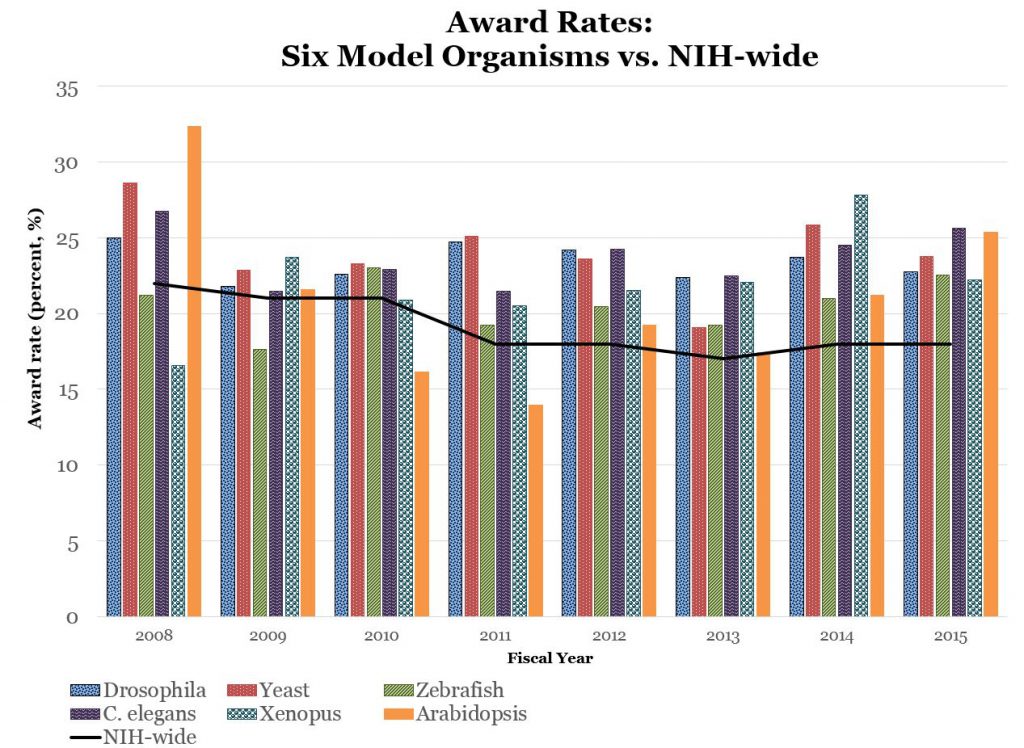 These findings, which are based on an automated thesaurus-based text mining system, are consistent with our previously presented findings, and suggest that NIH support for model organism research remains relatively stable with respect to award rates and amount of funding. Shifts in funding among specific model organisms likely reflects changes in the number of applications we received.

6 thoughts on “Model Organisms, Part 3: A Look at All RPGs for Six Models”