Wangler, et al. recently published an article in Genetics on NIH funding for model organism research involving Drosophila. The authors extracted grant information from NIH ExPORTER and looked for the word “Drosophila” in either the title or abstract. By this approach the authors found that NIH support for Drosophila-based research is declining.

We chose to investigate further trends in NIH support for Drosophila and other model organism research. Two groups of NIH staff used two different approaches.  Our Office of Research Information Systems (ORIS) used an automated thesaurus-based text mining system which mines not only project titles and abstracts but also the specific aims contained in the application; this is the system we use to generate “Research Condition and Disease Category” (or RCDC) tables, which are publicly posted to the NIH RePORT website. In a separate effort, our Office of Portfolio Analysis (OPA) supplemented a different text mining algorithm with extensive manual curation. Both methods – the wholly automated thesaurus-based text mining approach and the manual curation supplemented text mining approach – yielded similar findings.  In this blog, we will present the results of the manually curated approach.

We analyzed all R01 applications from FY 2008 to FY 2015 and used text mining to find specific keywords, including for Drosophila “Drosophila” or “melanogaster”; for C. elegans “Caenorhabditis elegans,” or “C. elegans”; for zebrafish “zebrafish,” “D. rerio,” “Danio rerio,” or “Brachydanio rerio”; and for Xenopus “X. laevis,” “Xenopus laevis,” “Xenopus,” “X. tropicalis,” or “Xenopus tropicalis.”  For Drosophila research we used additional filters including an author history that included a substantial fraction of papers with Drosophila keywords in the title.  For all model organisms we used a disambiguation protocol to identify R01 applicants who attended specific model organism meetings (except for Xenopus because of small numbers).  We had seven curators manually curate all candidate grants; among them there was strong agreement (Kappa 0.86 to 0.88). 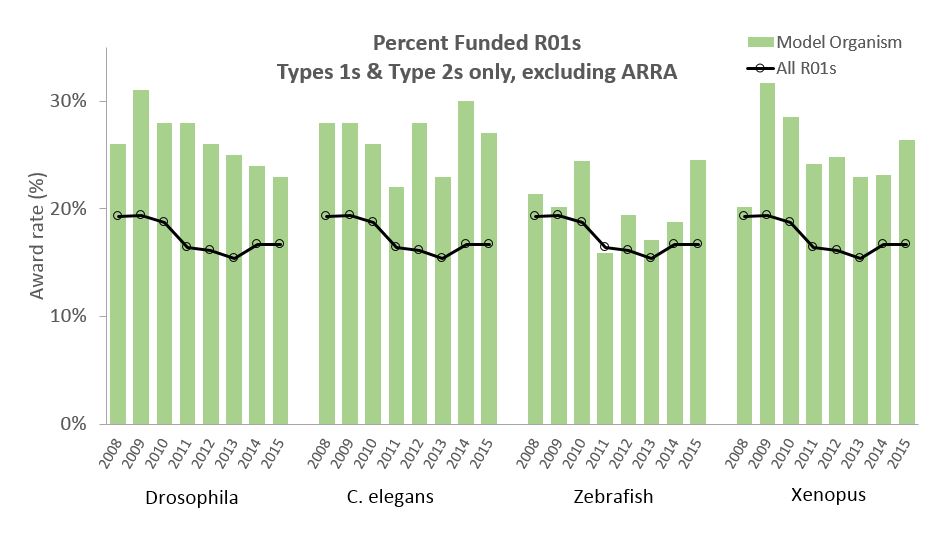 Figure 2 shows the number of non-ARRA Drosophila awards (competing and non-competing) over time.  The light blue bars refer to grants identified by Wangler et al., while the dark blue bars refer to grants we identified. For all years our text-mining and manual curation approach identified substantially more grants. While the overall number of awards has declined, the decline largely reflects the overall decline in support for NIH R01s. As a percentage of all R01s, the percentage of Drosophila awards has declined slightly from 2.31% in 2008 to 2.18% in 2015. 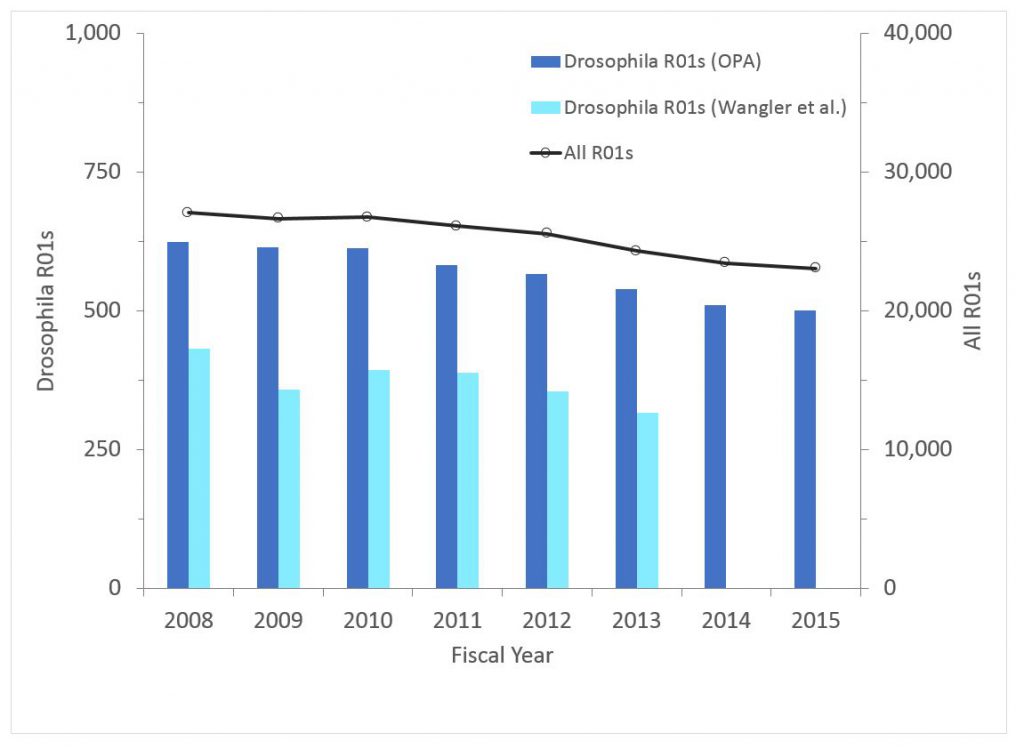 Figure 3 shows corresponding data except in terms of funded dollars.  The patterns are similar. 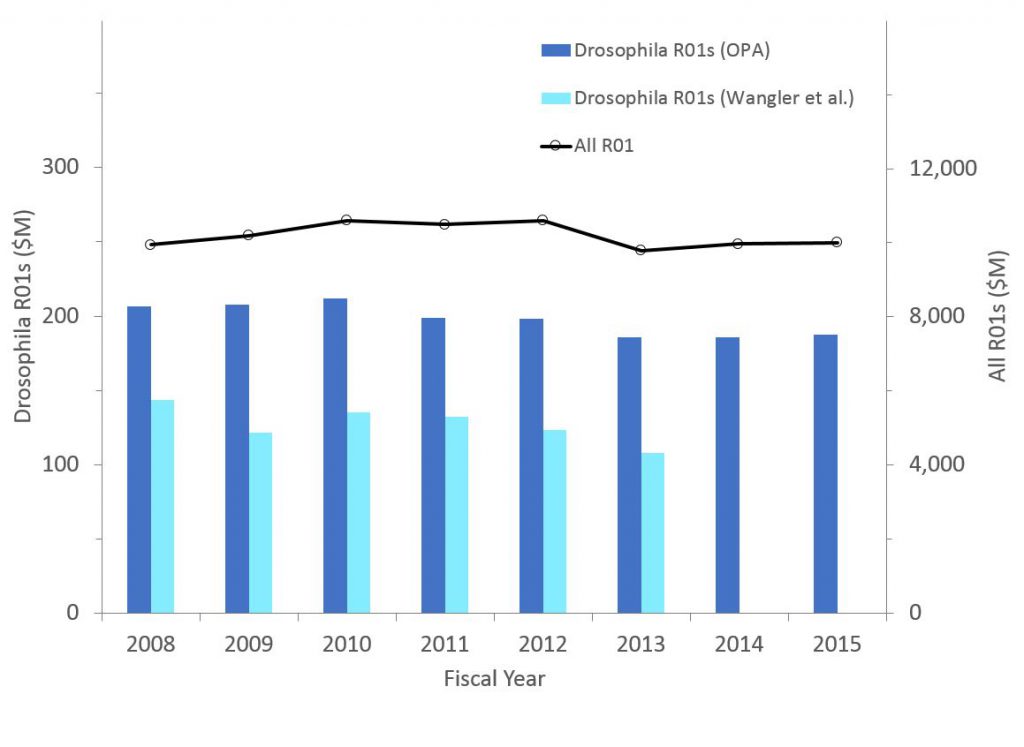 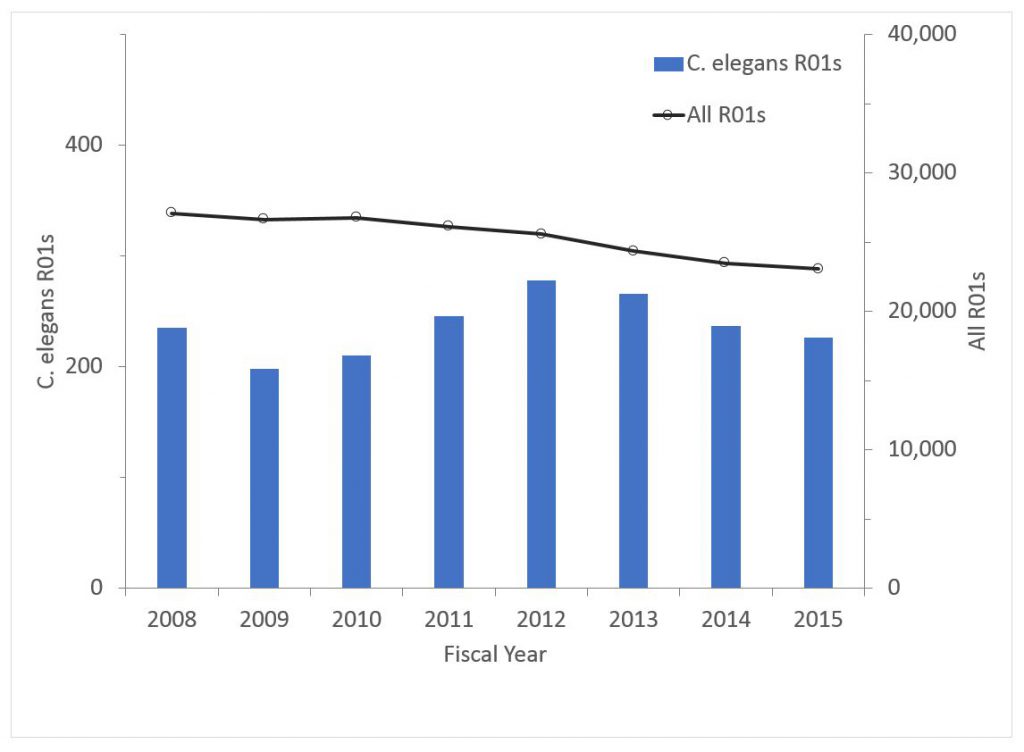 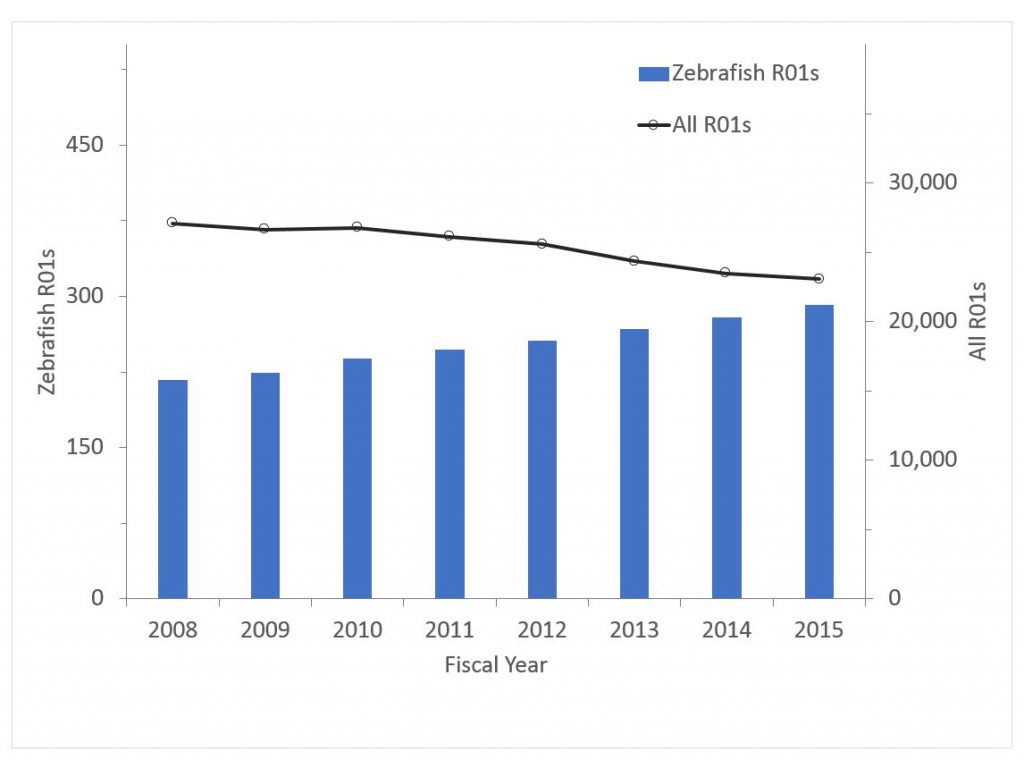 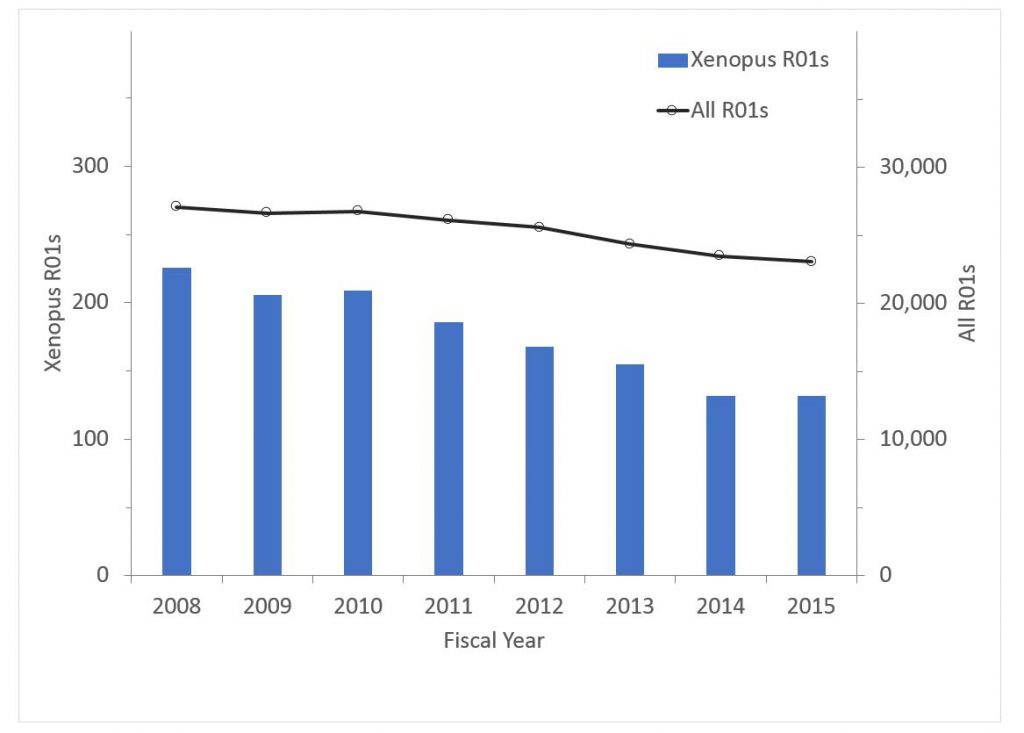 Overall, we found that award rates for model organization applications have been relatively stable with respect to both the number of awards and amount of funding. Drosophila awards have dropped slightly as a fraction of all R01s (from 2.31% to 2.18%), for an overall decrease of 5.6%. C. elegans awards oscillated, but overall increased by 36.1% while zebrafish awards increased by 58.8%. Xenopus awards fell by 31.3%.  Taken together, these data suggest a shift in focus from Xenopus towards C. elegans and zebrafish research, with the shift primarily explained by the number of applications we’ve received.

We are grateful to Office of Portfolio Analysis and Office of Extramural Research staff for their help in conducting these analyses.