Earlier this year, we posted a blog about inequalities in Research Project Grant (RPG) support for extramural principal investigators (PIs). The blog was based on a paper we published in which we showed, among other things, that well-funded PIs not only were supported by more money but also by a larger number of distinct grants. Over 80% of the PIs in the top centile (top 1%) of funding were supported by two or more grants, compared to only 33% of the PIs in the bottom 99%.

Many comments to that post requested data on time-related trends of number of RPGs supporting individual PIs. Figure 1 shows exactly that. In Fiscal Year 1985, approximately 80% of designated RPG PIs were supported on just 1 RPG (line with triangles at the top); that proportion has fallen over time to 67% in Fiscal Year 2021. Note the vertical dotted lines correspond to the NIH doubling (Fiscal Years 1998-2003) and budget sequestration (Fiscal Year 2013). 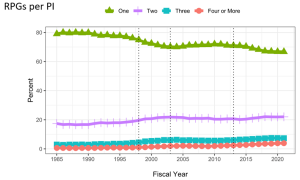 Figure 2 breaks down the same data according to the principal investigator’s self-reported sex. Over time, women were more likely than men to be designated as PI on only 1 RPG. 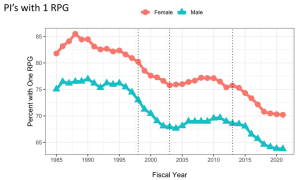 Figure 3 reverses the perspective by showing the proportion of designated PIs supported on 3 or more RPGs. That value has been rising and was always higher for men than for women. 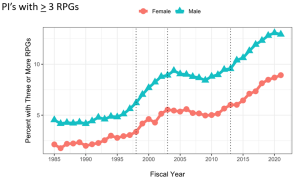 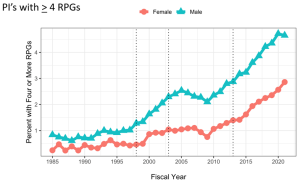 We thank you for your interest in our NIH grants data and for your probing questions.