Postdoctoral NIH T32 programs aim to provide select trainees with experience to enable successful career and research development. In a previous posting, we presented NIH career development, or K award, and R01 equivalent research grant outcomes of participants in post-doctoral T32 programs. We showed that men with MD-PhD degrees had the highest rates for R01 application submission and award receipt (as PI). Women comprised a greater proportion of trainees over time. Serving as PI on a K-awards predicted a substantially higher rate of later support as PI on R01 awards. Here we present further analyses focusing on the association of under-represented minority (URM) status with subsequent K or R01 awards.

These analyses are based on the outcomes of 33,977 T32 post-doctoral participants who matriculated between 1995 and 2009, for whom we had data on age, gender, and URM status, and who had received MD, MD-PhD, or PhD degrees. URM status was known in over 95% of matriculants, and was defined as self-identification as Black, Hispanic, American Indian, or Pacific Islander or participation in an NIH diversity program. We followed participants for designation as principal investigator (PI) on subsequent K and R01-equivalent awards (which we’ll refer to as R01 going forward) through 2017. Table 1 shows race and ethnicity according to gender; Whites and Asians were most common.

Table 1: T32 Participant Race and Ethnicity According to Gender

Table 2 shows characteristics and high-level outcomes according to matriculation cohort. Over time, a greater proportion of matriculants were women and, to a lesser extent, from URM groups.

Among all participants, 4,275, or 13%, served as PI on an R01-equivalent award during follow-up. Table 3 shows characteristics according to under-represented minority status. URM matriculants were more likely to be women and to be age 36 years or higher on matriculation; during follow-up they were just as likely to submit K applications and receive K awards, but were less likely to submit an R01 application or receive an R01 award (as PI). 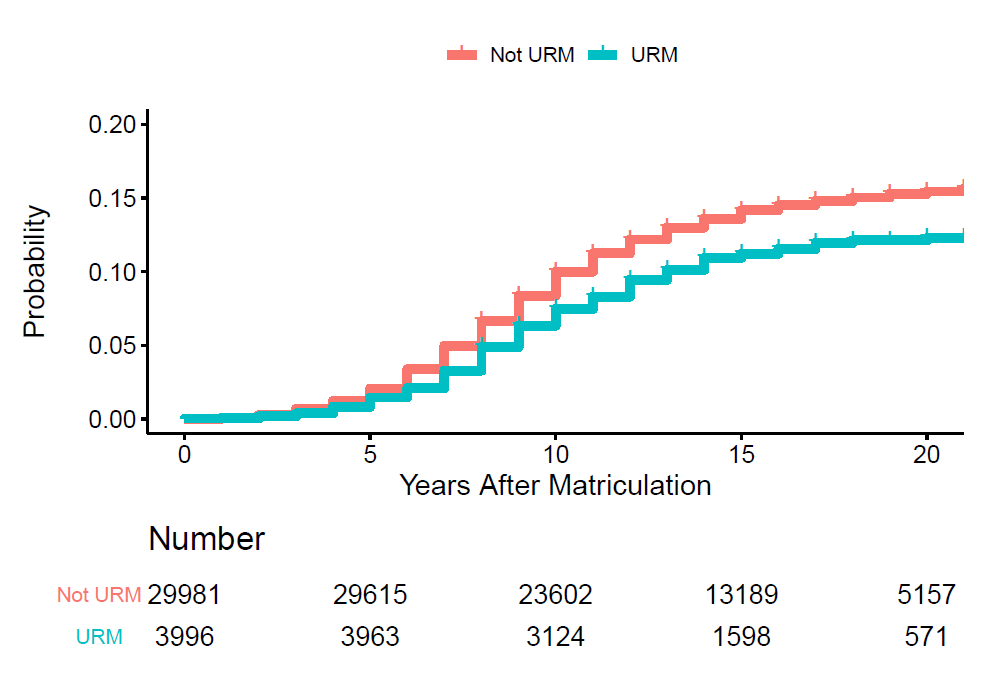 Figures 2 and 3 show that for both non-URM and URM matriculants, those who matriculated into post-doctoral programs after age 35 had a lower rate of serving as PI on an R01 award.

Figure 2: Time to first R01 award according to age among those not of under-represented minorities (URM) 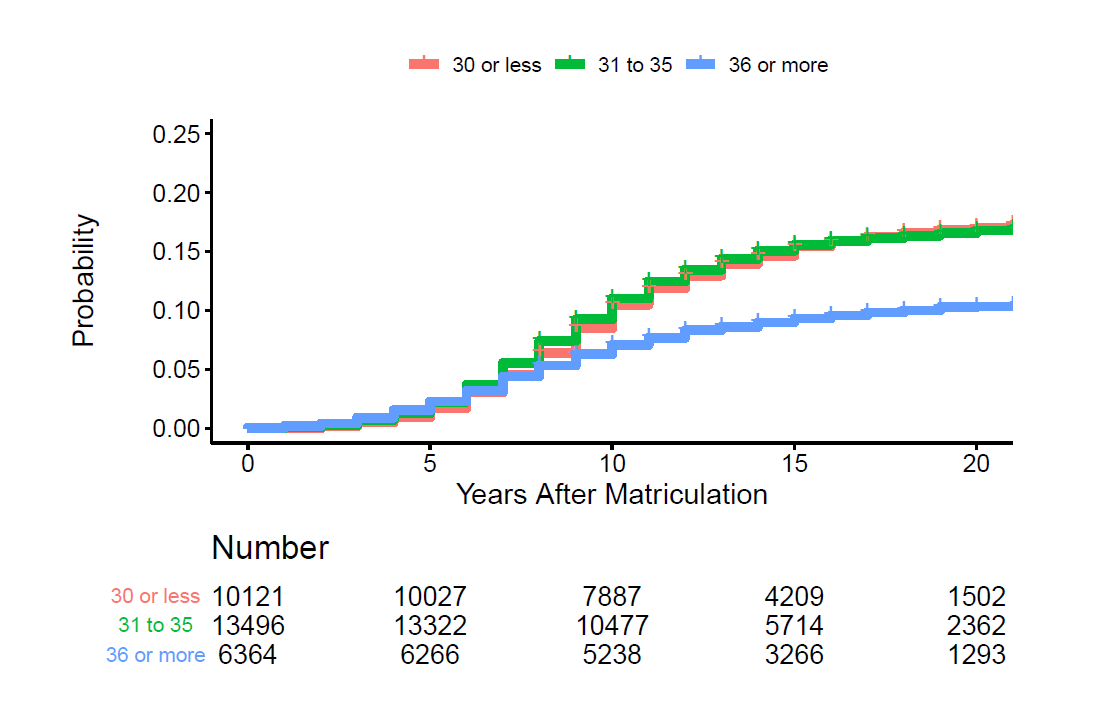 Figure 3: Time to first R01 award according to age among under-represented minorities (URM) 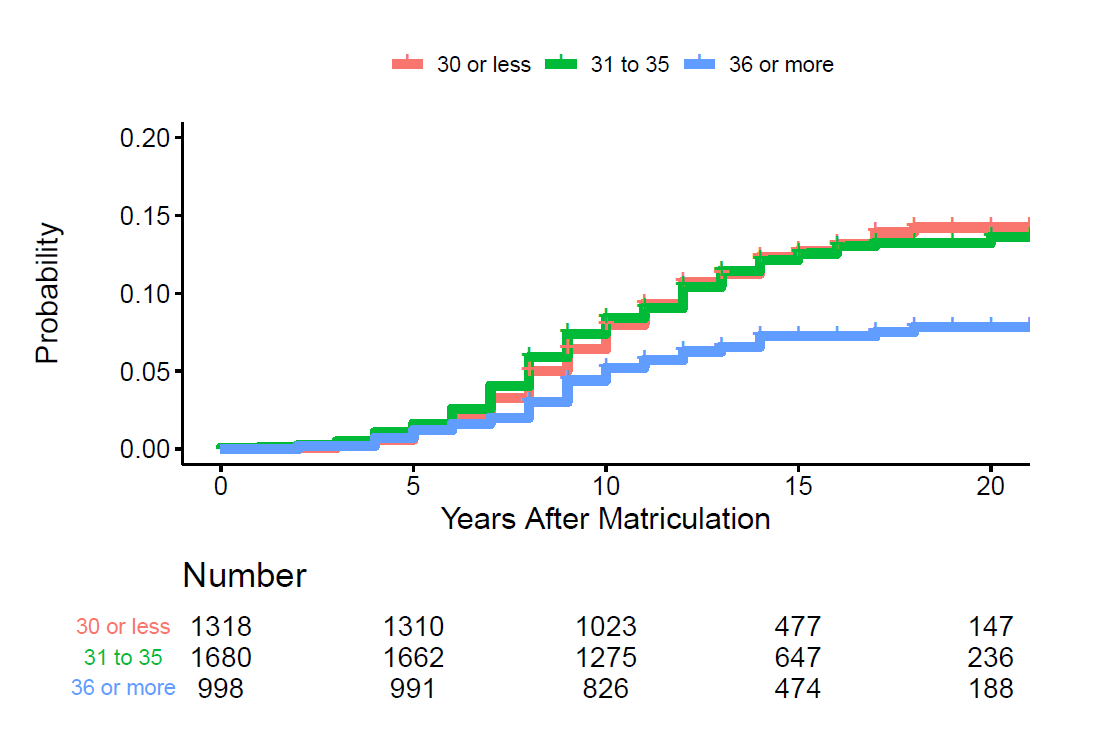 Figure 4 shows the combined associations of URM status and gender with rate of receiving an R01 award; female gender and URM status were associated with lower rates of R01 awards. 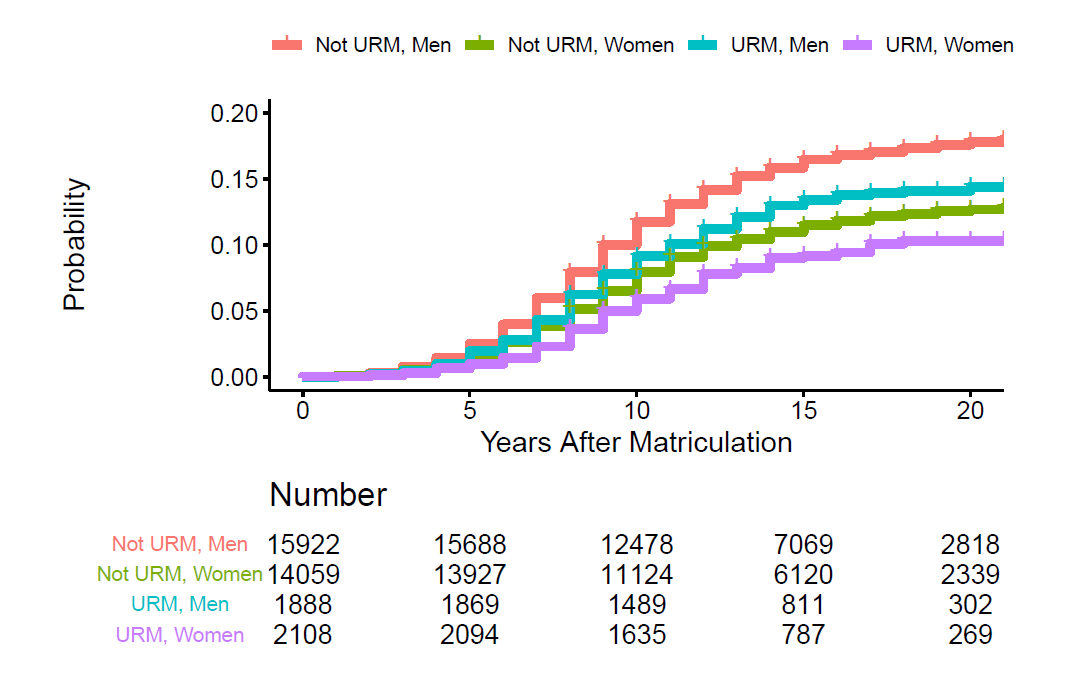 Figure 5 shows that among those trainees who received a K-award, non-URM K-awardees were more likely to be a PI on an R01 award sooner. 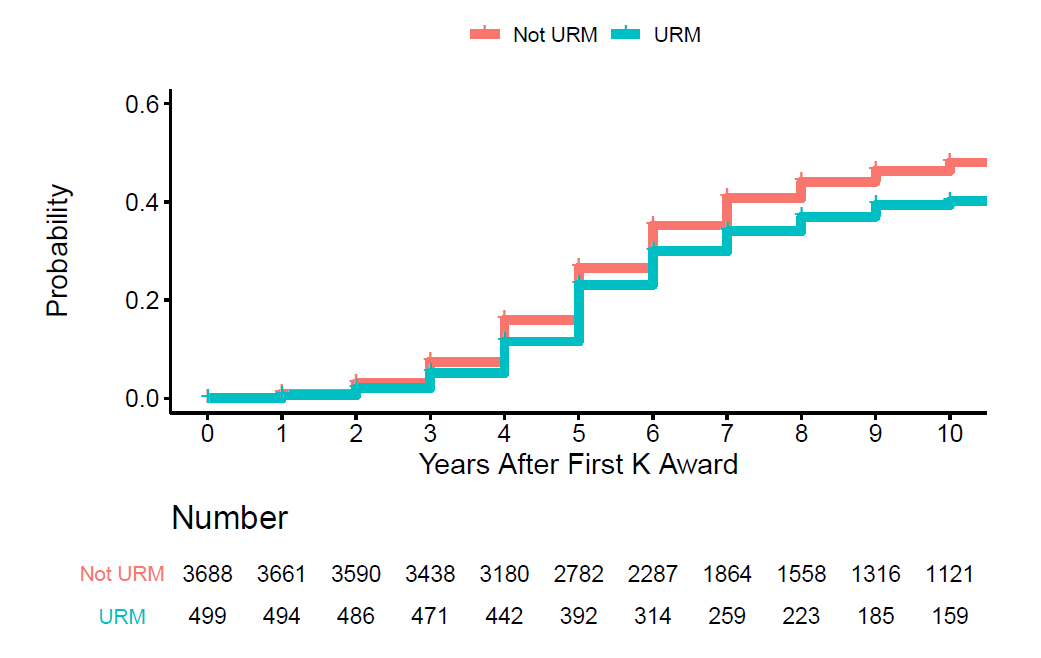 Table 4 shows a Cox proportional hazards model for time to R01 award. The analyses show adjusted associations of age, gender, degree type, matriculation cohort, and K-award (as a time-dependent covariate) with time to award. Men, recipients with MD-PhD degrees, non-URM matriculants, and recipients of K awards were more likely to become PI’s on R01 awards in less time. The model focuses on those 32,739 participants with at least 8 years of follow-up (since few R01 awards were issued earlier, leading to a violation of the proportional hazards assumption). By bootstrap validation the model performed well with an optimism-corrected concordance statistic of 0.786 (where a value of 1 would imply perfect discrimination and a value of 0.5 would imply that the model performs no better than chance).

Table 4: Cox Proportional Hazards Model for First Competing R01 Award among T32 Post-doctoral Matriculants for Those with at Least 8 Years of Follow-up

In these updated analyses of the outcomes of T32 post-doctoral trainees with MD, MD-PhD, and PhD degrees, we find that non-URM men had the highest rates for R01 application submission and award receipt (as PI). Women, and to a lesser extent, URM matriculants comprised a greater proportion of trainees over time; both women and URM matriculants had lower rates of R01 award receipt (as PI). Serving as PI on a K-awards predicted a substantially higher rate of later support as PI on R01 awards.