Earlier this year we reported on the unique numbers of research project grant (RPG) awardees and applicants each year since the end of the NIH doubling, in 2003. We described how the number of unique RPG awardees has remained relatively constant, while the number of applicants (as assessed over 5-year windows) has steadily and markedly increased. 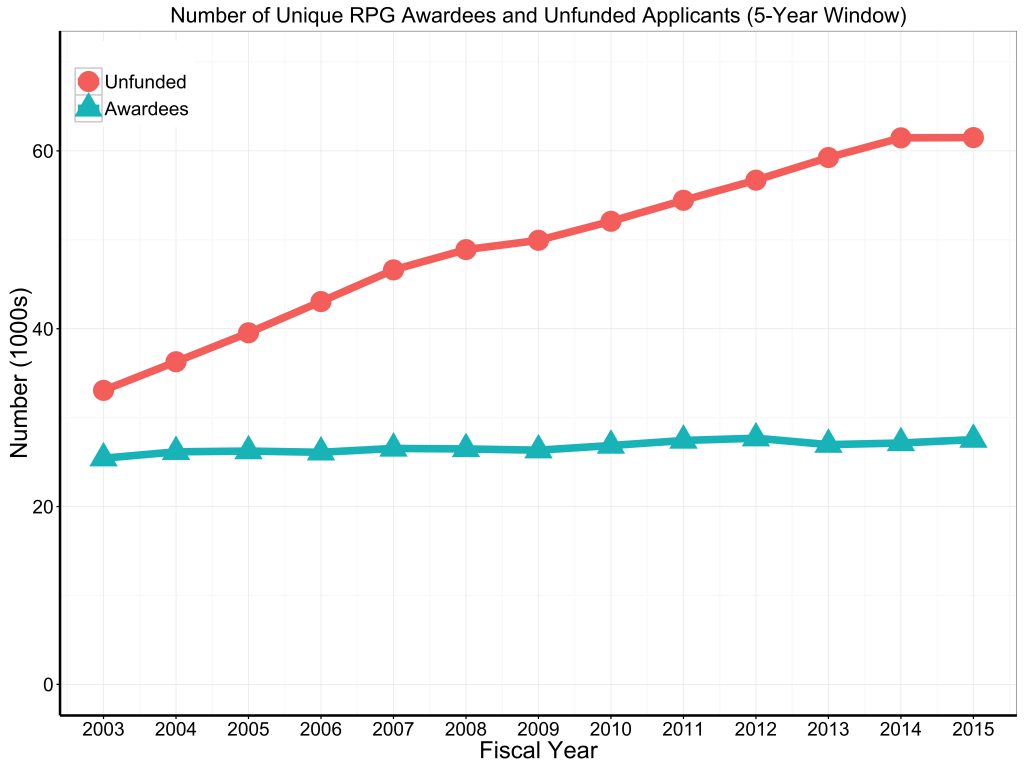 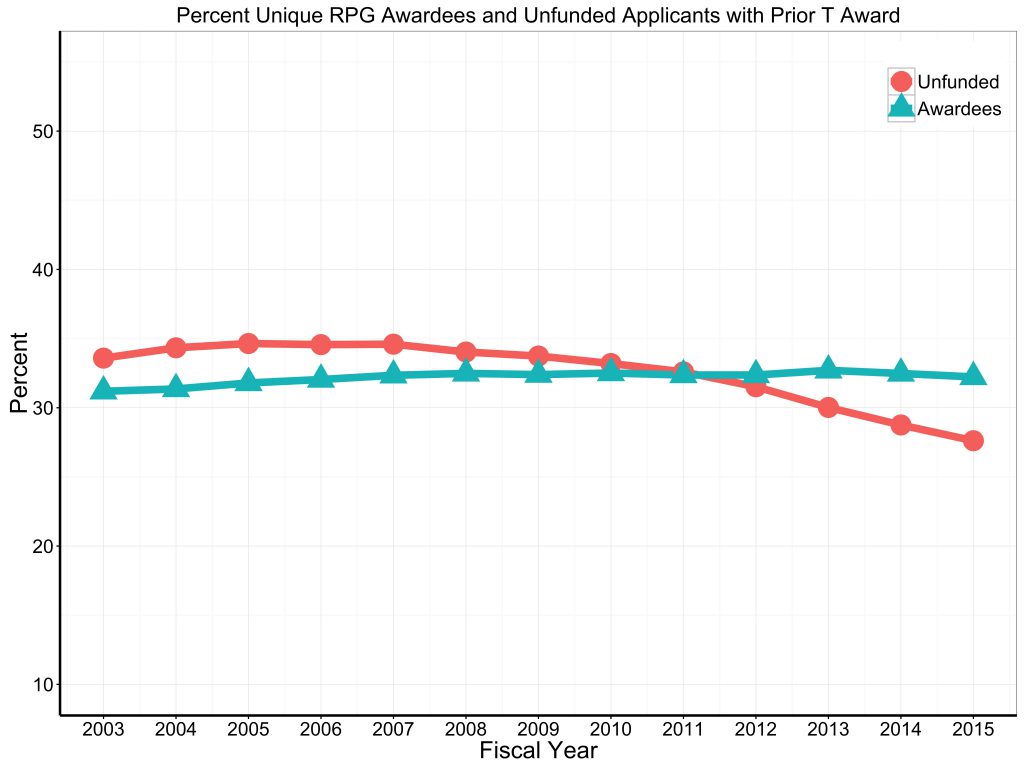 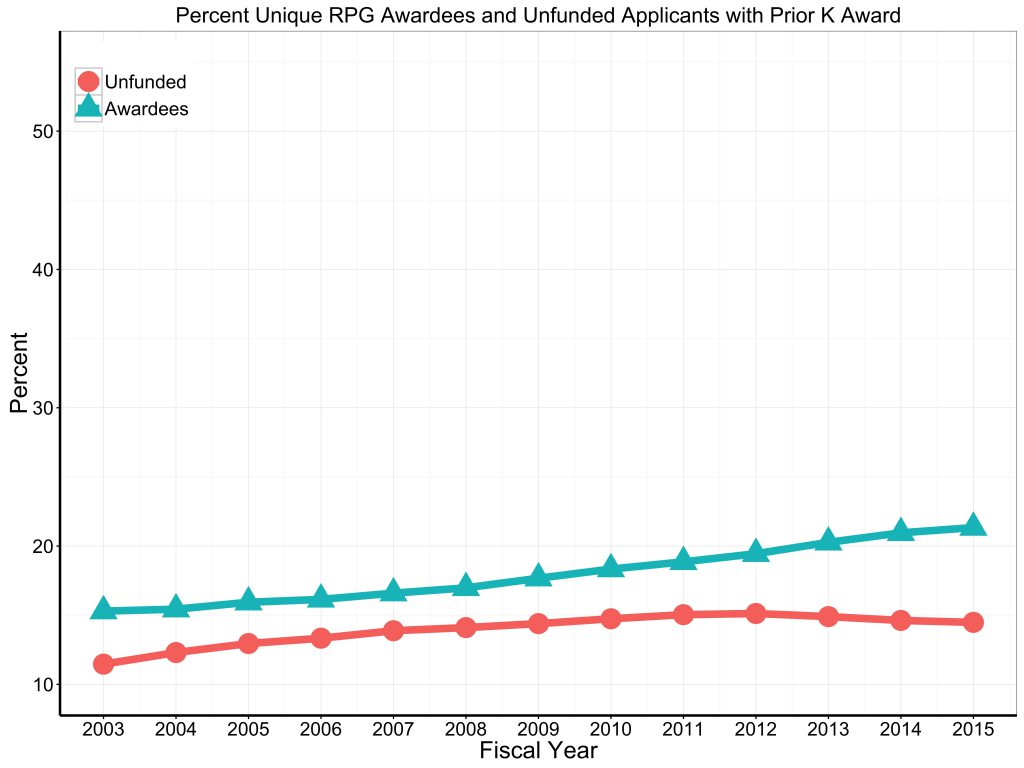 Figure 5 puts our data together, showing the percentage of awardees and unfunded applicants who had any prior fellowship, training or career award (note that some had received more than one prior award – here we look at whether they received any prior award at all). Since 2003, approximately half of all RPG awardees had received or been supported by at least one prior F, T, or K award, and the proportion has remained stable. However, among unfunded applicants, we find that the proportion with prior F, T, or K awards has substantially declined, from approximately 51% to just over 40%. 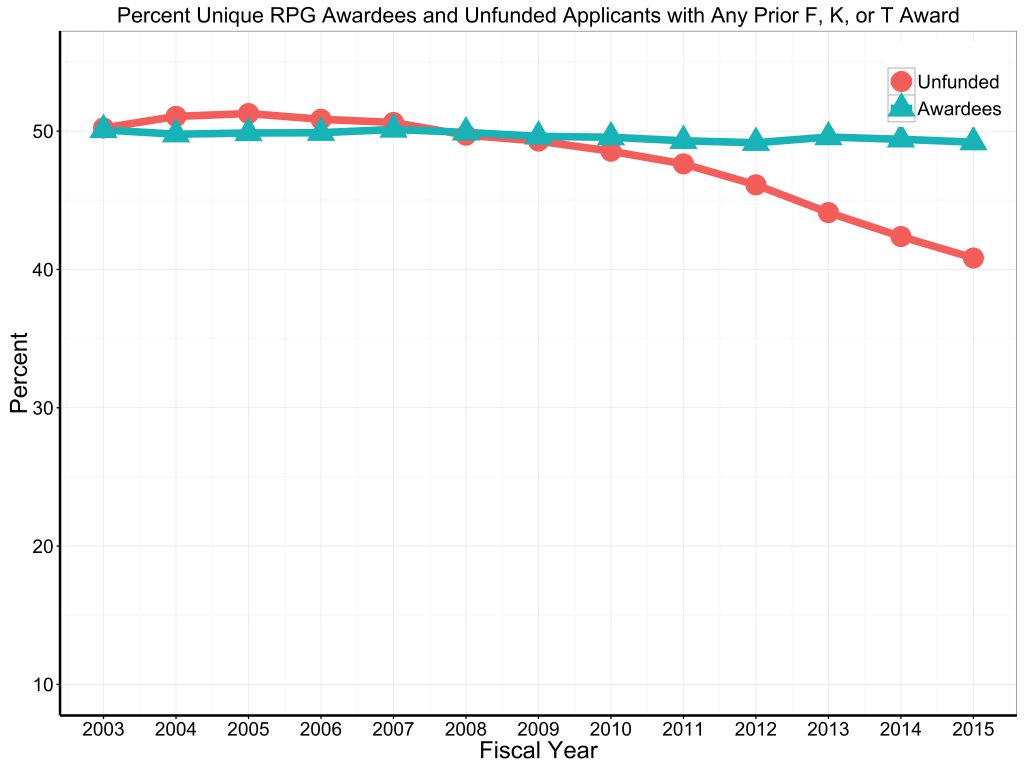 These findings suggest that with the advent of hyper-competition, successful awardees are more likely to have received prior training or career awards. Others have previously discussed the value of training and career development awards. Several years ago, an evaluation report of NIH individual mentored career development grants described the association between success in securing a K grant and subsequent grant application outcomes. Scientists who received K08 and K23 awards were more likely than those who K applications were unfunded to subsequently apply for and to receive an NIH RPG. Similarly, post-doctoral recipients of NRSA F and T awards are more likely than their colleagues to later apply for and receive an NIH RPG (.pptx link, see slide 28). In their recently published book Follow the Money, Funding Research in a Large Academic Health Center

, Henry Bourne and Eric Vermillion (both from the University of California at San Francisco) note that K awards effectively function as “auditions” for aspiring faculty members. They write, “Judging clinical competence is straightforward, but it remains fiendishly hard to predict whether a budding scientist will succeed…So, the university uses NIH K awards to help decide whether or not to accept candidate clinician-scientists as full faculty members.” Our current findings suggest that with increasing levels of competition, investigators who wish to secure RPGs are more likely to be successful if they previously competed for and received a training or career development award.

I am most grateful to my colleagues in the OER Statistical and Analysis Reporting Branch for their help in conducting and presenting these analyses.

6 thoughts on “How Many Researchers Were Supported by NIH as Trainees?”