As described on our grants website, the R21 activity code “is intended to encourage exploratory/developmental research by providing support for the early and conceptual stages of project development.” NIH seeks applications for “exploratory, novel studies that break new ground,” for “high-risk, high-reward studies,” and for projects that are distinct from those that would be funded by the traditional R01. R21 grants are short duration (project period for up to 2 years) and lower in budget than most R01s (combined budget over two years cannot exceed $275,000 in direct costs). NIH institutes and centers (ICs) approach the R21 mechanism in variable ways: 18 ICs accept investigator-initiated R21 applications in response to the parent R21 funding opportunity, while 7 ICs only accept R21 applications in response to specific funding opportunity announcements. As mentioned in a 2015 Rock Talk blog, we at NIH are interested in trends in R01s in comparison to other research project grants, so today I’d like to continue and expand on looking at R01 and R21 trends across NIH’s extramural research program. 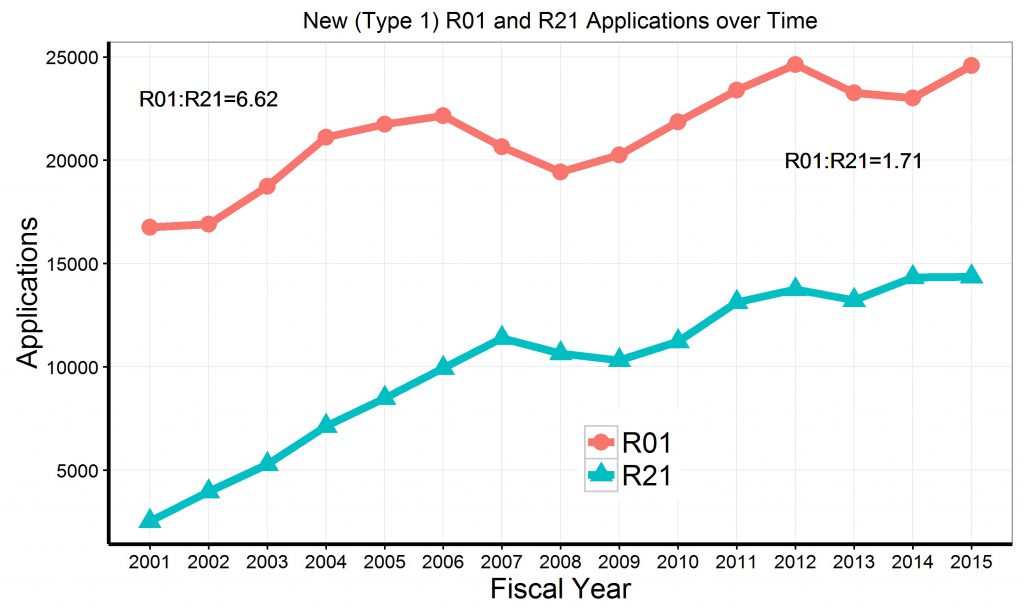 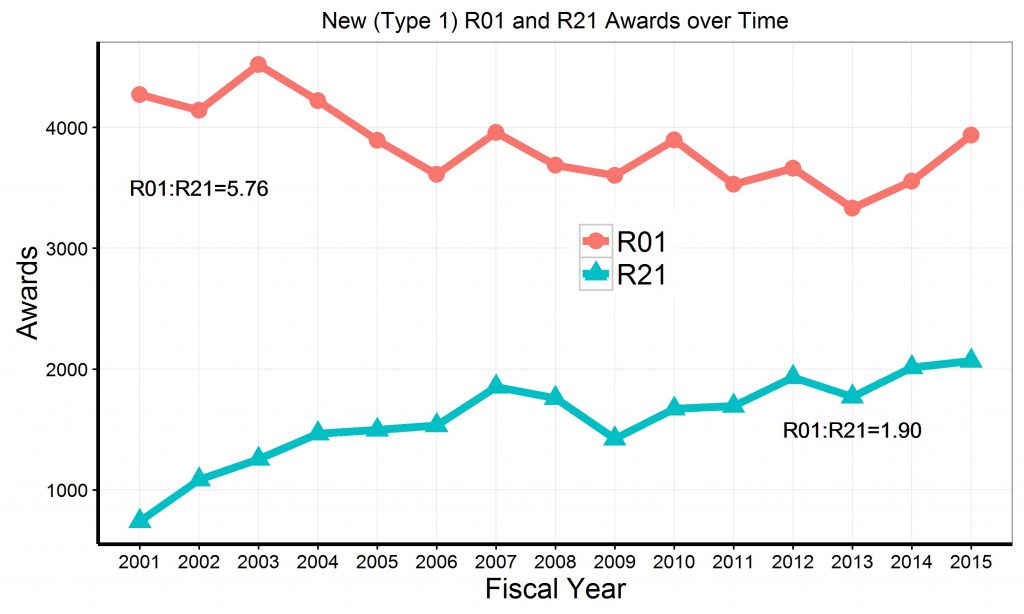 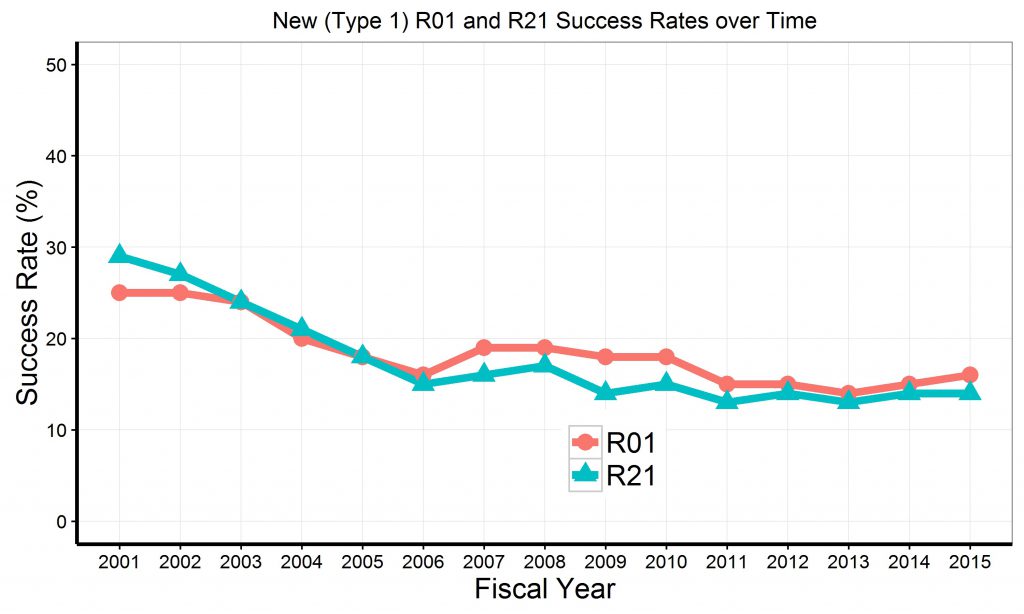 Since R21 projects are intended to be exploratory, we used text-mining software to see how often R21 awardees subsequently submitted related R01 applications. We used a text matching algorithm similar to what we used for our previous analyses of “virtual A2 applications.” For R21 awards that were active in fiscal years 2012-2014, we looked for subsequent R01 applications that were at least 60% textually similar 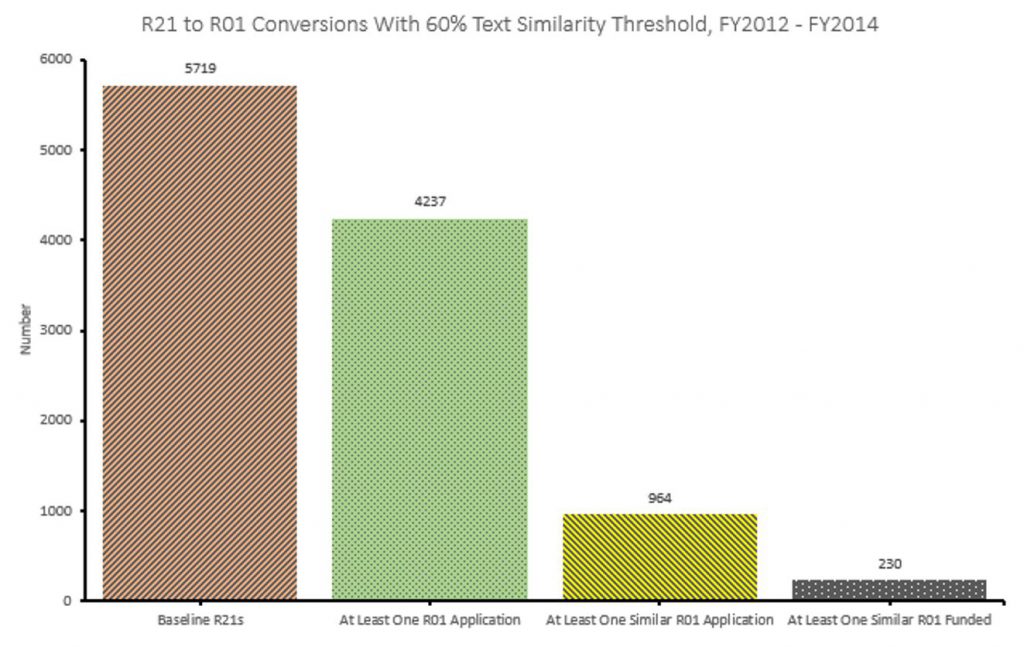 Figure 5 shows the same data except broken down by the Fiscal Year in which the baseline R21 was funded. 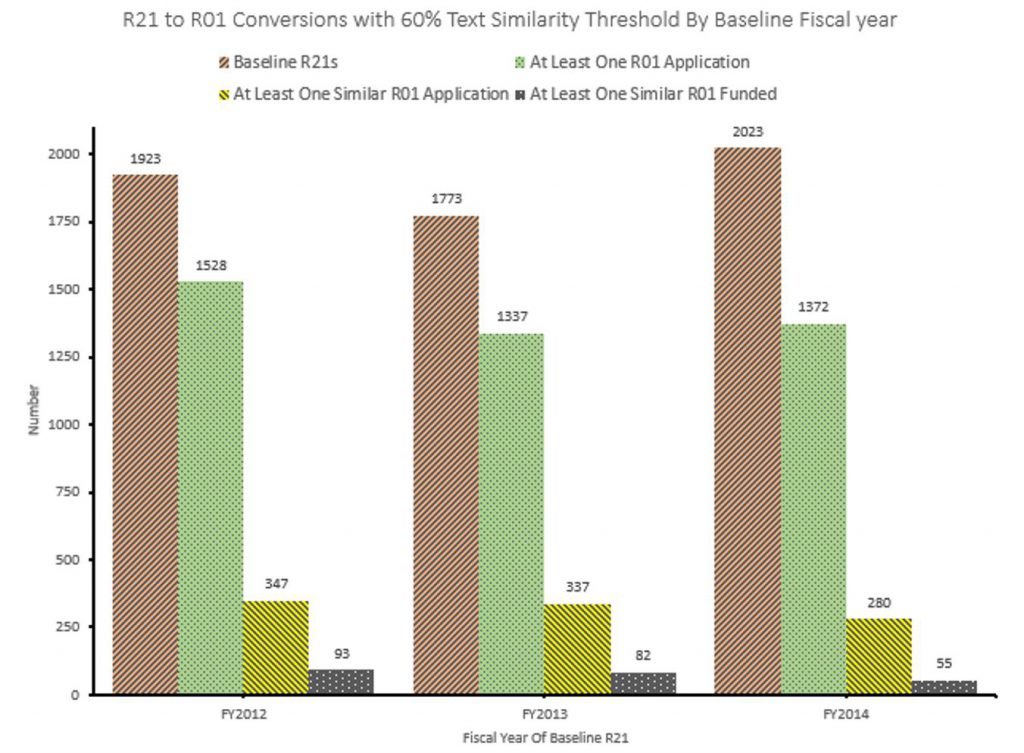 As a quality check, we pulled out a 15% sample of R21-R01 application pairs in which our text-mining software indicated at least a 60% similarity. Our subject matter experts found that in over 80% of cases, there was a plausible relationship between the two projects.

Putting these findings together, we see that:

I am grateful to my colleagues in the OER Statistical and Analysis Reporting Branch (SARB), in the OER Research Condition and Disease Category (RCDC) Branch, and the OER Office of Extramural Programs (OEP) for assistance with these analyses. I also thank Dr. Rebekah Rasooly, program director at the National Institute of Diabetes and Digestive and Kidney Disease; Dr. Sherry Mills, chair of a trans-NIH committee examining the R21 at NIH; and the R21 committee members.

14 thoughts on “R01 and R21 Applications & Awards: Trends and Relationships Across NIH”