Here we discuss how inflation has been relevant to NIH Research Project Grants (RPG), the largest component of extramural NIH funding.

We can start with a straightforward question: What is inflation? The US Federal Reserve defines inflation as “the increase in the prices of goods and services over time.” Prices for research project grants may increase over time for a variety of reasons:

We will focus on real (as opposed to nominal) costs of NIH RPG awards, that is total costs per RPG indexed for the FY2021 BRDPI. First, though, we’ll review a high-level history of NIH RPGs. Figure 2 shows the number of unique competing and non-competing RPGs awarded each year. Between 1998 and 2021, NIH issued 827,815 RPG awards of at least $25,000 per year (BRDPI-indexed to 2021). The 3 vertical dotted lines refer to the beginning and end of the NIH-doubling (1998 and 2003) and the year of budget sequestration (2013). The number of RPGs increased during the doubling, decreased gradually between the end of the doubling and 2015, and rose again with recent NIH budget increases.

Careful inspection of Figure 5 reveals an interesting pattern in variation. From the time of the doubling until about 2010, the distance between the whisker tips decreased. We can call this distance the “whisker range.” From 2012 through 2021 whisker ranges increased, exceeding levels for the doubling. We can think of the upper (and lower) whisker tips as the most extremely expensive (inexpensive) award that is not an outlier; the distance of the tips from the center (median) reflects the agency’s general willingness to vary its funding instruments. Figure 6 shows the whisker ranges declined from $920,000 to $750,000 between FY2002 and FY2010 and increased to over $1 million in FY2021. 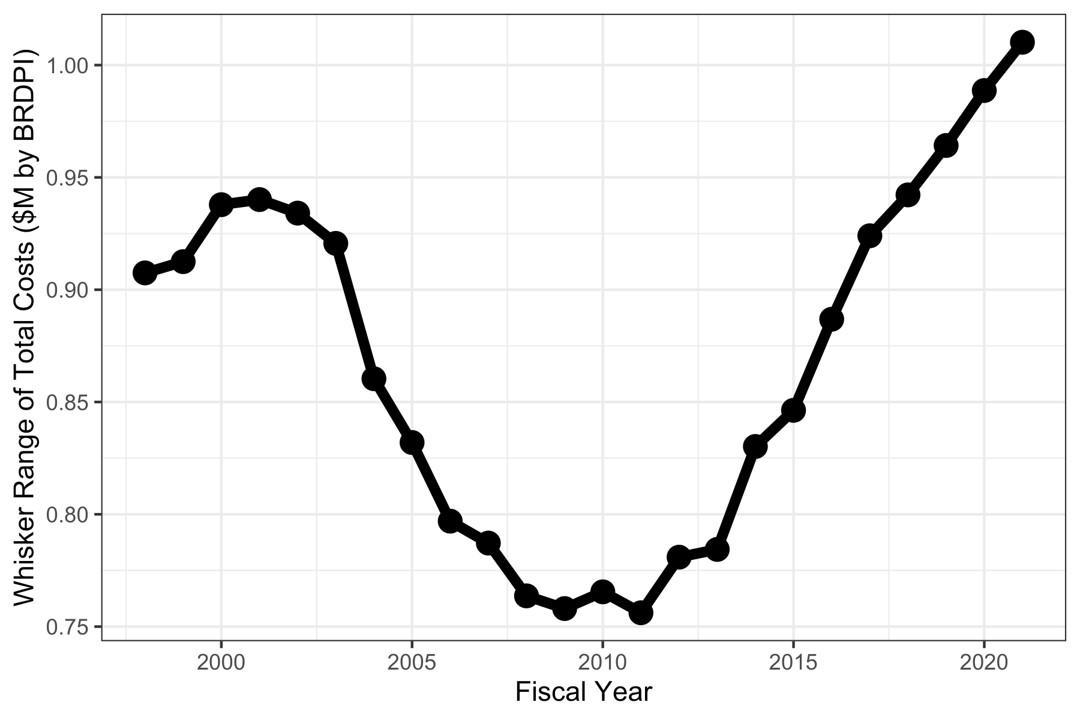 What’s behind these trends? Table 1 shows characteristics of funded RPGs in select fiscal years 1998 (begin of budget doubling), 2003 (end of budget doubling), 2013 (sequestration), 2019 (before the pandemic), and 2021 (most recent year). Over time a greater proportion of RPGs are funded from IC solicitations, involve high total costs (defined here as >$ 5 million is 2021 inflation-adjusted dollars), cooperative agreements, and R03 or R21 mechanisms.

In summary, these analyses show that:

If you want to learn more about these analyses, please see this more detailed report.

I am grateful to my colleagues in the OER Division of Statistical Analyses and Reporting for their help in conducting and reporting these analyses.

*The post was updated to correct the order of figures.