We previously referenced Ioannidis’ and Khoury’s “PQRST” mnemonic for describing research impact: “P” is productivity, “Q” is quality, “R” is reproducibility, “S” is sharing, and “T” is translation.  We wrote several blogs about “P,” productivity, focusing on publications, citations, and more recently the Relative Citation Ratio.  Now we’ll focus on a different kind of “P” for productivity, namely patents (which arguably are also related to “T” for translation).  We’ll also take a brief look at “S” for sharing.

In the April 7, 2017 issue of Science, Danielle Li [now with the Massachusetts Institute of Technology (MIT)], Pierre Azoulay (MIT), and Bhaven Sampat (Columbia University) published an investigation on the patent productivity of NIH grants. They identified over 365,000 grants NIH funded between 1980 and 2007, and linked them to patents. Two kinds of links were identified: “direct” links in which a patent cited an NIH grant, and “indirect” links, in which a patent cited a paper which in turn acknowledged support from an NIH grant.

The authors found that close to 10% of grants directly generate a patent. That’s remarkable!  But perhaps even more so, nearly 30% of grants generate a paper that is later cited by at least one patent. Even more remarkable, grants directly and indirectly generated patents whether they were “disease-targeted” or not, “patient-oriented” or not, or linked to a Request For Application or not. And, large proportions of grants assigned to different models directly and indirectly generated patents – models including humans, primates, rodents, invertebrates, multicellular eukaryotes, unicellular eukaryotes, prokaryotes, and viruses.

Another noteworthy feature of this paper is that the authors freely shared their data and statistical code. We took advantage of this to ask a question: do NIH-supported papers that are cited by patents have a higher Relative Citation Ratio than those that are not cited by patents? As a refresher, the Relative Citation Ratio uses citation rates to measure the influence of a publication at the article level. 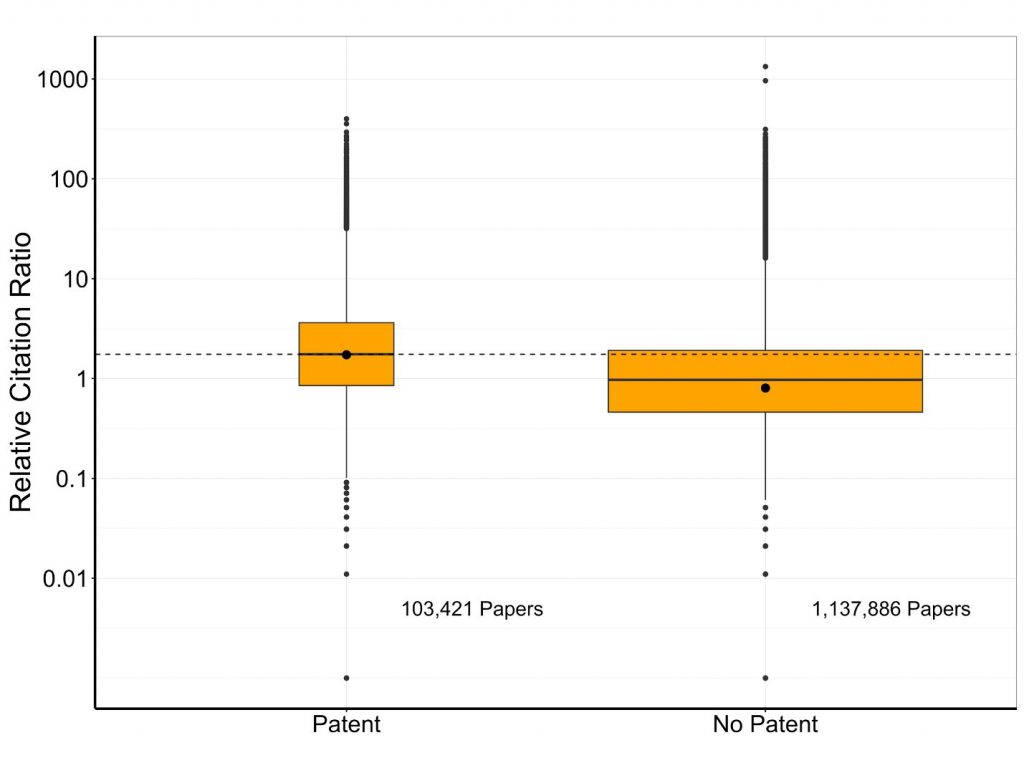 Figure 2 shows the Relative Citation Ratio of papers according to the number of patents citing them.  There is a gradient, with Relative Citation Ratio increasing as papers are cited by zero, one, two, three, or more than three patents (median values of 0.97, 1.46, 1.66, 1.87, and 2.40).  For convenience, a dotted line goes through the median RCR (1.46) for papers citing one patent. 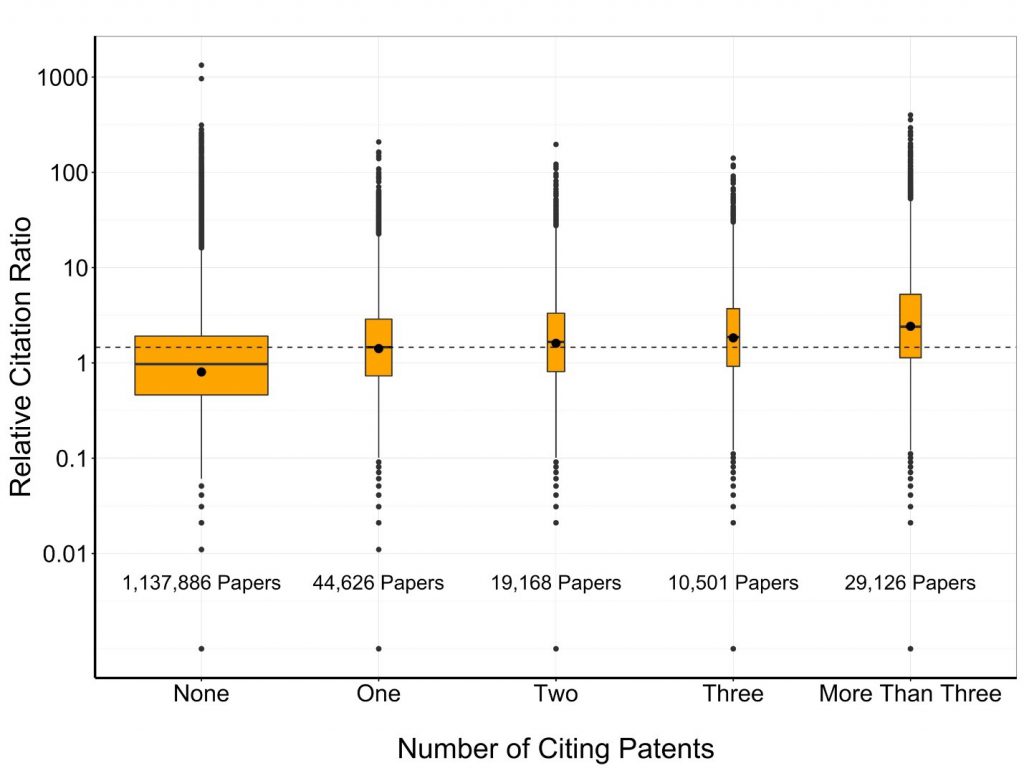 Taken together, the data presented here suggest that the number of publications cited by a patent positively correlates with a higher relative citation ratio. In other words, when patents cite a publication, that article is also likely to be highly influential in its field.

These preliminary findings show one way we are continuing to explore research impact beyond bibliometrics. Though helpful, focusing on bibliometrics alone does not completely capture productivity and impact of our funded research programs. The analysis we present here attempts to build upon prior work by adding yet another instrument to our toolbox.

And finally, the “S,” sharing that is…

We are pleased to hear about ways researchers use our data to empirically analyze the productivity of NIH-supported research. We congratulate the authors of the Science article, and commend their willingness to share their data. We progress towards our goal of enhanced transparency and stewardship when researchers share data with each other and when funding agencies share administrative data. Ultimately, sharing information this way is how we, together, improve human health and reduce illness and disability.

4 thoughts on “Patents and the Relative Citation Ratio: Correlations to Assess NIH Impact”